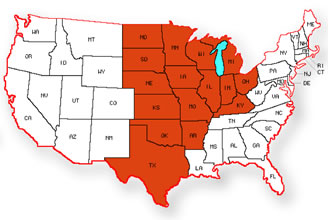 The Midwest Association of Fish and Wildlife Agencies (MAFWA) welcomes public comments through May 31 on a draft conservation plan that provides a blueprint for reversing the decline of the eastern monarch butterfly population.

The draft plan, called the Mid-America Monarch Conservation Strategy, builds on existing efforts of state, federal, and local agencies and private organizations and individuals. It covers a 16-state region stretching from Texas to the Upper Midwest that encompasses the primary production and migratory habitat areas for eastern monarchs (see map). Other eastern monarch states are also collaborating with the plan.

The draft plan identifies conservation goals and strategies for improving habitats in various sectors or categories of land use such as natural areas, agricultural lands, urban lands, and rights of way. State wildlife agencies and partners will be working to add milkweed plants where lacking and to ensure diverse, nectar-plant-rich landscapes with blooming species during seasons when monarchs are present. 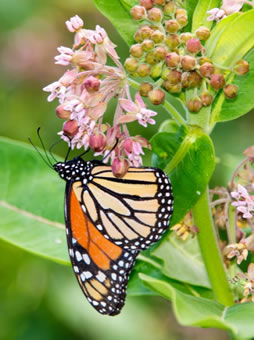 “In addition to their beauty, pollinators such as butterflies, bees, and other species provide important pollination services critical to our food supplies and economies,” said Terry Steinwand, MAFWA President. “This is the first phase of a long-term strategy that will require increased commitment of people and resources to support enhanced monarch and pollinator conservation and monitoring efforts by many partners over the next 20 years.”

Eastern monarchs, those found east of the Rocky Mountains, have declined by more than 80 percent over the past 20 years primarily due to habitat loss, including reduced milkweed required for reproduction and fewer nectar plants. In 2014 the monarch was petitioned for listing under the federal Endangered Species Act, and a decision on whether listing is warranted is expected in 2019.

Monarchs produce multiple generations each year and undertake a lengthy fall migration from the U.S. and southern Canada to the forested mountains of central Mexico where they overwinter. The goal of the strategy is to coordinate state and partner efforts to restore and enhance habitat to support an average overwintering population in Mexico occupying about 15 acres (6 hectares), consistent with international goals.

For more information, a copy of the draft strategy, and how to submit comments, please visit the MAFWA website at Mid-America Monarch Conservation Strategy.

This entry was posted in Uncategorized. Bookmark the permalink.