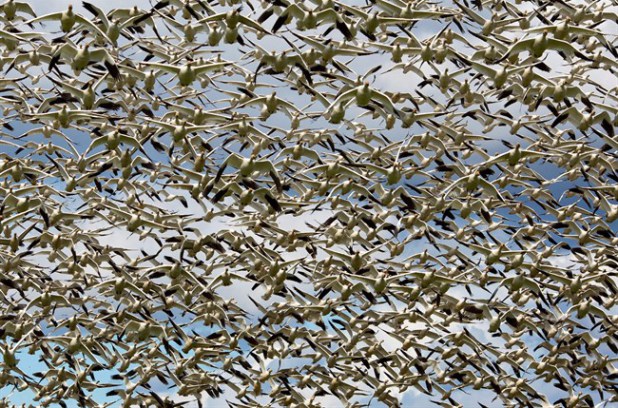 After more than a decade of devastating huge swaths of Arctic tundra, booming populations of snow geese may have finally stabilized.

But scientists say the teeming flocks, which have turned fertile grasslands into salty mud flats, are still at unheard-of levels and have forced wildlife managers to consider a whole new problem.

“We’ve always wanted more (wildlife) and protected them and saved them and increased their numbers,” said Dave Duncan, manager of population conservation for the Canadian Wildlife Service. “Just in the last little while wildlife management is faced with this new conundrum of overabundant species.

In the last 20 years, new farming methods have resulted in better food supply along the big white birds’ migration routes and their population has responded.

In the 1970s and ’80s, there were between two million and three million snow geese in central North America. Now there are about 15 million.

Nesting colonies now are so large the birds are destroying their own habitat.

“In the spring, when the ground is wet, they’ll dig up what’s called the rhizome of the grass, the starchy root. Once they’ve grazed the grass down to such a short level that it’s not useful to them any more, they dig up this starchy root.

“They’ll convert an area that was once covered in grass to exposed mud. When this mud is left exposed, the evaporation rate goes up and you get this salt crust on the top. Then it’s very difficult for plants to recolonize those areas.”

Years of relaxed hunting rules up and down the migration route didn’t help much.

“It appears that the population may be stabilizing, but not because of reductions in survival of adults. It’s this density dependence that reduces the number of young per adult.”

There’s more good news. Duncan said that at least some ravaged colony sites along the west coast of Hudson Bay appear to be recovering.

Some birds, such as sandpipers or longspurs, appear to suffer from huge flocks. Others, such as king eider ducks, seem to benefit. Polar bears, forced off the sea ice earlier and earlier, are learning to stuff themselves on goose eggs.

A cull? The logistics are challenging — what do you do with two million dead birds? — and the costs are high.

Scientists believe the best plan is to monitor the swollen flocks and to look around the rest of the Arctic to see where else they might colonize.

“We don’t know enough about the magnitude and extent of the damage in the Arctic,” said Duncan.

“Environment Canada’s position is to more fully understand the extent of the impact of snow geese on the broader ecosystem, not just at local levels … before going that route of a cull,” Alisauskas said. “We want to understand the science a lot better than we do.”

The concept of weighing one species against another, of nurturing nature into sustainability, is a new one for wildlife managers.

“One hundred years ago, wildlife management was all about saving and conserving populations,” Duncan said. “Only in the last decade or two have we got these superabundant species — deer in New York, too many ring-billed gulls in Toronto, or too many coyotes.”

Nobody knows where to draw the line between natural use and overuse, said Smith.

“Geese are a natural part of the Arctic so you expect some of this to be happening. The question is, where’s an acceptable limit?”

This entry was posted in Agriculture, Species Management. Bookmark the permalink.