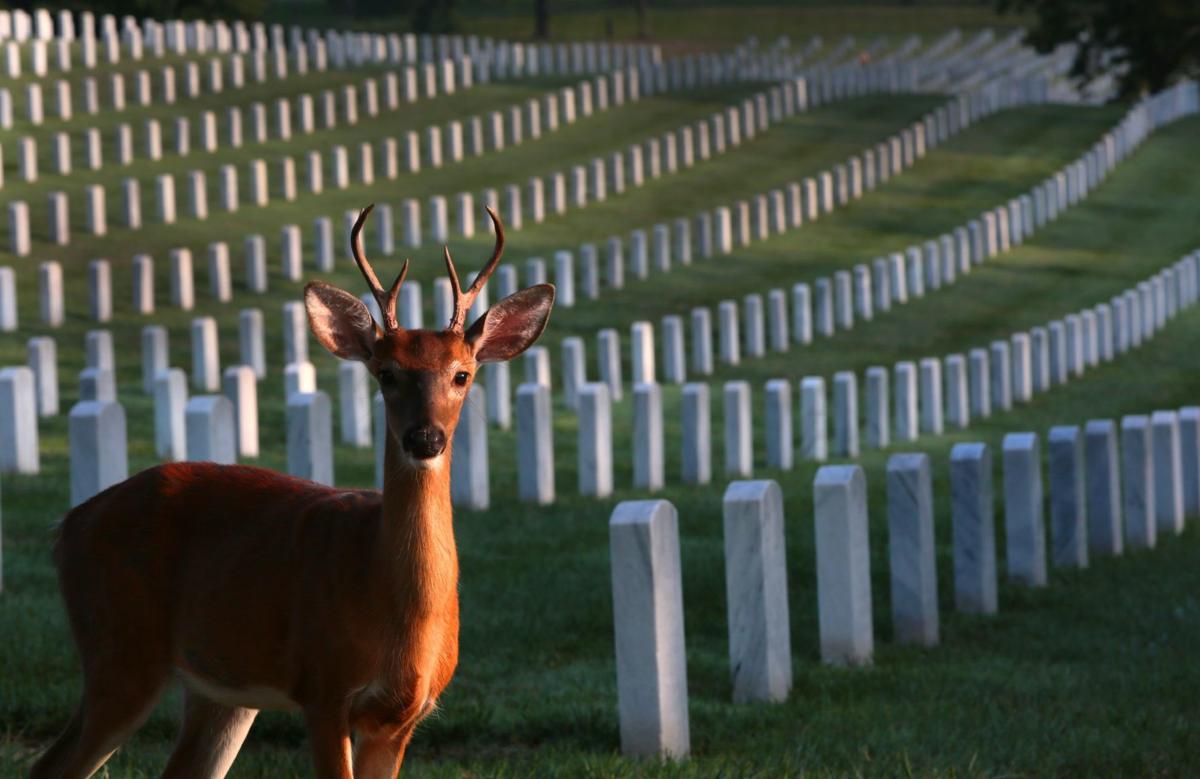 A deer stops grazing to look over a visitor at Jefferson Barracks National Cemetery at sunrise on Tuesday, Aug. 29, 2017. The animals are plentiful in the early morning hours, eating grass and flowers left behind at graves. Photo by Robert Cohen, rcohen@post-dispatch.com

JEFFERSON CITY • The state’s highest court bucked Missouri’s captive deer hunting industry Tuesday, saying the state government has a right to regulate the companies in order to control a deadly brain disease affecting the animals. The case involved the owners of hunting preserves who challenged regulations imposed by the Missouri Department of Conservation in 2014 that attempted to crack down on the spread of chronic wasting disease by limiting the importation of deer and elk into the state.

Chronic wasting disease is a brain disease that affects deer, elk and moose. It was first detected in Missouri in 2010 at a private hunting preserve in Linn County. Since that time, the conservation agency has imposed testing for the disease as part of the check-in process for deer hunters in selected counties of the state. The department confirmed 33 new cases of the disease after testing nearly 24,500 free-ranging Missouri deer last year, bringing the total number of confirmed cases to 75 since 2010.

In its decision, the court reversed a lower court ruling that favored the hunting preserves, saying there is no question that deer are wildlife. Quoting a 110-year-old decision of the court, Judge Paul Wilson wrote, “It makes no difference that said deer were raised in captivity, and had become tame. They are naturally wild.”

In a statement, the Missouri Conservation Commission said it was pleased with the ruling. “The commission will be working closely and in collaboration with hunting preserves and wildlife-breeding facilities to ensure regulation compliance and to minimize the risk associated with the movement and holding of captive deer. The goal is to help protect Missouri’s deer herd, now and into the future, from the 100 percent fatal chronic wasting disease, which has advanced across the Missouri landscape since it was first found in 2010.”

But Donald Hill, owner of a 1,300-acre hunting preserve in Gasconade County, said he believes the commission is trying to close down his operation and others like it. I’m numb. Its going to put a lot of farmers out of business,” said Hill, who was one of the plaintiffs in the case. On his farm near Bland, Hill has an estimated 800 deer in hunting and breeding facilities. “We’ve invested millions of dollars in Missouri,” Hill said.

The court’s ruling likely will mean the regulations that had been set to go into effect on Jan. 1, 2015, will begin to be enforced. In addition to barring white-tailed deer, mule deer and other hybrids from being imported into Missouri, breeders would face new record-keeping and permitting requirements under the new rules. The proposals call for stiffer fencing requirements and testing for chronic wasting disease when a deer older than 6 months dies in a facility.