The amount of land enrolled in the Conservation Reserve Program (CRP), at 27.1 million acres, is down by 26 percent, or 9.7 million acres in the past five years, to a 25 year low. During this same time period, corn acreage has increased by 13 million acres. Farmers are once again planting crops on marginal lands “fencerow to fencerow” to cash in on today’s high commodity prices. CRP payments haven’t risen to compete with crop returns, and the program itself is being whittled away by Congress.

The Conservation Reserve Program exists to provide land owners with some financial incentive to idle their land, which in turn benefits the environment while providing commodity price support by reducing surplus production. But now, ethanol policy makes that curb of surplus production unnecessary. The original CRP legislation, the Food Security Act of 1985, set a goal of enrolling over 40 million acres into the program by 1990 but that has never been reached and is now falling sharply. The laws regulating the program have been tweaked many times since begun in 1985, being tugged and pulled by various special interests. Prior to the CRP, we had “set aside acres” in the 1970′s and “soil bank” acres in the 1960′s.

If you visit one of the USDA’s websites promoting the benefits of the Conservation Reserve Program, you will see a long list including the following:

• Protects surface waters from sediment and nutrient enrichment with enrollment of 1.8 million acres of streamside grass and forested buffers.

There’s nothing not to like in that list. CRP policy is an environmentally friendly one which helps protect this nation’s privately owned natural resources of soil and water. It adds to biodiversity and wildlife habitat. The program is especially appreciated by older farmers. On the down side, nearly half of CRP funds go to the top ten percent of recipients, according to the Environmental Working Group. And, some politicians argue that we shouldn’t pay farmers not to farm where they shouldn’t be farming in the first place.

Today, the economic incentive to grow corn, even on marginal lands, far exceeds the average amount of $57 paid per acre by the CRP program. Keep in mind that most of the acres enrolled in CRP have always been the marginal lands, those which are less productive, and are more vulnerable to erosion. In addition, budgetary pressures in writing a new farm bill make this program an easy target. At this year’s current enrollment the CRP costs the taxpayer around $1.6 billion, down from 2 billion a few years ago.

The map below shows us that 2.5 Million Acres of Conservation Reserve Program (CRP) land was lost in just one year in the contracts held in 2011 versus 2012. Much of the area exiting the program this past year was in the Plains states to grow more corn on marginal land. The two states converting the most CRP land to crops this year are North Dakota and Montana, in part due to inroads of corn and soybean acres into this traditionally wheat growing region. After these two states, Minnesota, Missouri, and Kansas top the list of recent CRP lands lost for crop conversion. 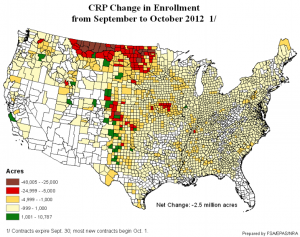 Agribusinesses are reaping fat financial rewards from the price incentive to plant a record 97 million acres in corn, including on what was formerly CRP land. Further land use changes are also resulting from the ripple effect that high corn prices have on all of the commodities, not only in the U.S. but around the globe. High prices are appreciated by producers, but current Ag policy of intensive, industrial, all out agricultural production isn’t free and it isn’t sustainable. Unfortunately, environmental interests can’t compete politically with policies that promote the increased use of fertilizers, pesticides, seeds, commodity exchange, and equipment sales.

This next graph shows us the loss of CRP land since 2007 in the top four corn producing states.

Farmers, who are always at the mercy of policy which determines their economic survival, are being told today that they are being patriotic and helping with national security and energy independence by growing corn for ethanol. A truly patriotic policy would instead be the preservation of our nation’s soil and water for future generations.

This story wouldn’t be complete without pointing out the sharp contrast in priorities of land conservation between the top agricultural leaders of the E.U. and the U.S.

The European Union’s agricultural commissioner, Dacian Cioloş, saw the destruction that all out production did to the soils in his home country of Romania under the former communist regime, so he wants to see 7 percent of E.U. farmland turned into environmental priority areas which are off-limits to the use of chemicals and high-tech farming methods. He also knows that 90 percent of Europeans want to see policies which promote the public good in return for their taxpayer money spent on agriculture. He was trained as a horticultural engineer and spent thirteen months over a number of years doing organic farm internships in Brittany France. He was selected to lead the E.U. in agriculture because of his horiticultural experience and education, and for his “modern vision” for agriculture. He wants an E.U. agricultural policy that discourages monocultures, encourages rotational farming methods, and decreases fertilizer use.

In contrast, our U.S. Secretary of Agriculture, Tom Vilsack, is a lawyer and a politician, a former governor of Iowa.

If allowed a say on the issue, Americans, too, might strongly support CRP initiatives over today’s other farm programs which are far more expensive: direct payments, tax payer subsidized crop insurance, and biofuels incentives.

But, CRP support in Congress is fading. In the 2008 farm bill, it took a hit of 7 million fewer acres, and in the 2012 farm bill the plan is to cut another 7 million acres and to cap the program at a total of 25 million acres by 2017. That’s a far cry from the original 40 million acres planned in the 1985 legislation. A total of $6 billion in conservation cuts is expected in the next farm bill. In the congressional fiasco that occurred at 2012′s year-end, the old farm bill was extended through September 2013, when a new bill covering the next five years should have been passed and would now be in place.

The story and statistics that I’ve presented above aren’t widely-known. Americans need to contact their policy-makers to let them know what is important to them. The Conservation Reserve Program and agricultural conservation support is in trouble and needs our help.

This entry was posted in Agriculture, Farm Bill, Wildlife Legislation. Bookmark the permalink.