Tougher penalties would apply to illegal taking of wildlife valued at $2,000 or more. 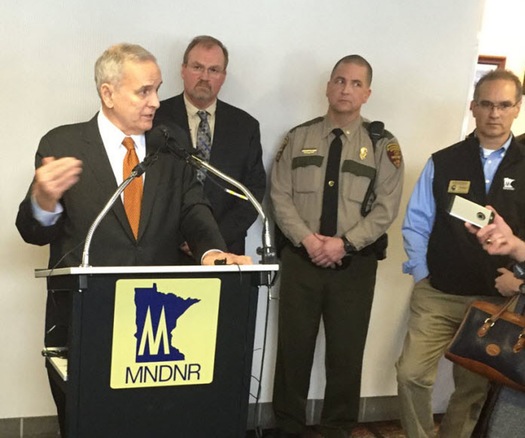 Frustrated by fish and game poachers who get a “slap on the wrist” for serious offenses, Gov. Mark Dayton on Friday proposed that some wildlife crimes be prosecuted as felonies.

“The recently reported instances of wanton and wasteful poaching in Minnesota should offend the sensibilities of all ethical and law-abiding hunters and anglers,” Dayton said at the annual Department of Natural Resources stakeholders meeting in Brooklyn Center.

Dayton made a similar proposal last year to the Legislature, including revocation of hunting and fishing licenses for some offenses for up to 10 years, but the initiative was rebuffed.

Under the governor’s proposal, felony-level offenses would apply to the unlawful take of animals with a restitution value of $2,000 or more.

Examples would include the illegal taking of four or more deer, two or more trophy deer, five or more bears or turkeys, 40 or more ducks, geese, pheasants, grouse or salmon, and 67 or more walleyes or northern pike.

Under Minnesota law, these and similar serious poaching cases can only be prosecuted as gross misdemeanors, with license revocations of up to five years.

Felony offenses for taking wildlife with restitution value of $2,000 or more::

5 or more bears or turkeys

67 or more walleye or northern pike

“I’m offended when I see these stories about a guy who slaughtered a lot of deer and got away with it,” Dayton said.

The governor was particularly incensed by reports in 2014 of a bust in west-central Minnesota by DNR conservation officers, during which 28 sets of deer antlers were seized.

The officers spent four years investigating the case, including aerial surveillance of the suspect’s rural Dawson, Minn., home, before securing a court warrant to place a tracking device on the suspect’s vehicle.

A short while later, the suspect and a friend were stopped at night by DNR officers, who found a freshly killed whitetail buck in the back of his pickup.

The case has yet to be tried.

And in 2013 in northwest Minnesota, two rare bull elk were killed near Grygla in an area closed to hunting. No arrests have been made in that case.

Dennis Mackedanz, executive director of Turn In Poachers (TIP), a nonprofit that for 35 years has worked alongside the DNR and other enforcement agencies to report wildlife offenses, said Friday that conservation officers this summer confiscated 676 sunfish and crappies from a group fishing on Cormorant Lake in Becker County.

“But poachers steal from all of us,” Landwehr said.

DNR enforcement chief Ken Soring, who retired recently, has noted that stealing $1,000 from a person is a felony in Minnesota, but stealing $5,000 worth of fish and wildlife isn’t.

Similarly, a logger who steals $1,000 worth of timber is prosecuted as a felon in Minnesota. But a poacher who kills wildlife worth five times as much isn’t.

In fact, notwithstanding the high-profile cases cited Friday, the tougher poaching provisions, if enacted, likely would affect relatively few violators.

In 2013, for instance, the DNR prosecuted only eight people for poaching cases involving restitution of more than $1,000.

In recent sessions, the Legislature has enacted some new poaching provisions, suggesting that perhaps lawmakers might this time be receptive to Dayton’s proposal when they reconvene in March.

In 2012, the Legislature toughened deer-baiting penalties, adding a one-year license revocation to poachers convicted of the offense. And in 2001, Minnesota joined a compact of 45 states that revokes hunting and fishing licenses in each of the states following a poaching conviction in one.