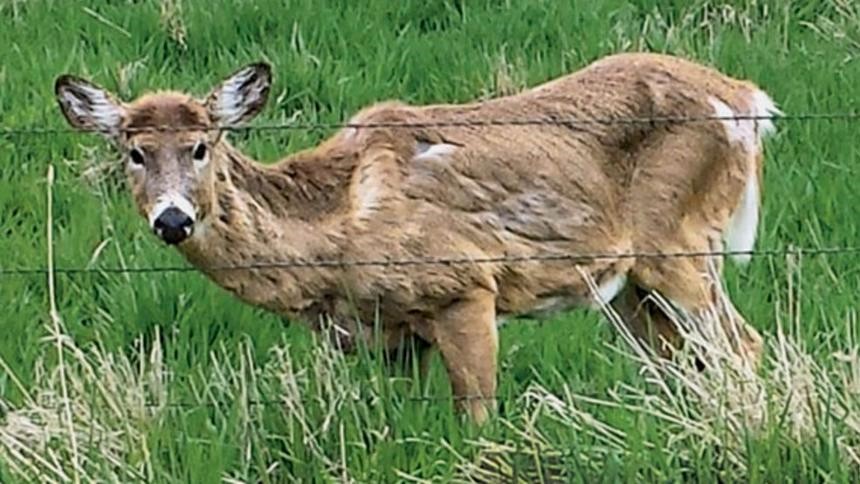 But it’s not just deer populations that are at stake — it could be the future of deer hunting. Even if wild deer somehow persist on the landscape, it’s unclear how many hunters would still want to hunt them if CWD remains a possible threat to people.

The disease has never been confirmed in people, but it’s very similar to mad cow disease, which crossed species and killed humans.

CWD, caused by mutated proteins called prions, already has crossed species to macaque monkeys that were fed infected meat in laboratory tests. Dr. Michael Osterholm, director of the Center for Infectious Disease Research and Policy at the University of Minnesota and an expert on infectious diseases, puts the human danger bluntly.

“I do believe that it is not a matter of if, but when, CWD crosses to humans,’’ Osterholm told the News Tribune.

“That’s the biggest scare with this disease — what that would do” to deer hunting and wildlife management, said Michelle Carstensen, wildlife health program group leader for the Minnesota Department of Natural Resources.

CWD can be spread not just by infected live deer, but by contaminated feces, saliva and other bodily fluids and body parts from deer long dead. Predators that eat infected meat can move the mutated proteins around for miles. It can persist in soil for years, maybe indefinitely. It can even be taken up from soil by plants that healthy deer might eat.

“It’s kind of like radioactivity. Once you have this stuff, it never really goes away,’’ said Lindsay Thomas of the Quality Deer Management Association, a national deer hunting group based in Georgia. “So the goal is to keep it out as long as you possibly can. If you don’t have it, you don’t want it. Consider it like a front in a war where you do everything to keep it out. Deer hunters need to be at war with this disease.”

But in Minnesota, wildlife officials are battling the disease aggressively this winter, trying to keep CWD confined to a few captive deer farms and small areas of wild deer habitat. So far, only 32 wild deer in Minnesota have been confirmed with CWD, all in southeastern counties, compared to thousands in Wisconsin.

“By the time Wisconsin discovered they had CWD, in 2002, it was probably already on the landscape for a decade. They were already over 5 percent prevalence (of CWD among wild deer in infected areas.). So, the horse was already out of the barn,’’ Carstensen said. “But we are at only 1 or 2 percent, even in our core (CWD-infected area.) Is it realistic to say we can eliminate CWD in Minnesota? No, it’s not possible. But we think we still have a chance to keep it in check.”

This winter in and around southern Minnesota’s Fillmore County efforts are underway to kill as many deer as possible in the core of the CWD-infected area to reduce the population and thus reducing the chance of spread. Special public and landowner hunts were held in December and early January. Later this month, U.S. Department of Agriculture sharpshooters will be called in to kill even more deer. Each deer will be tested for CWD.

Just east of that primary CWD zone, in Houston County in the southeast corner of the state, special public hunts will be held in coming weeks to kill and test more deer around where a single mature buckshot in November tested positive for CWD.

“We really want to know if that buck was an outlier, if he wandered in from somewhere else, or if we have CWD in that area,’’ Carstensen said. The buck was 8 miles from a CWD-infected deer farm in Winona County, about 15 miles away from the nearest CWD-infected wild deer in Minnesota and about 20 miles from CWD-infected areas of Iowa and Wisconsin.

“We have no idea where that buck became infected,” Carstensen said.

So far, landowners, hunters and Minnesota lawmakers have cooperated with the DNR’s aggressive culling strategy, agreeing to see fewer deer in their favorite area — at least for a year or two until populations bounce back — in exchange for a chance at keeping CWD from spreading.

“We have a few people who can’t see past the next hunting season and that big buck they want to shoot and don’t want us taking more deer,’’ Carstensen said. “But, for the most part, we have people who are thinking about the future, about whether their grandchildren will have deer hunting.”

Craig Engwall, executive director of the Minnesota Deer Hunters Association, said his group continues to support the DNR’s aggressive efforts. He said the approach is similar to battling against invasive species: You can’t stop the spread of invaders like zebra mussels, he noted, but you can slow it down and keep them out as long as possible — until, maybe, scientists come up with a defense.

“We want Minnesota to take the aggressive approach so we don’t end up like Wisconsin,’’ Engwall said. “I think there’s pretty good public support to go after this (CWD) while we still can.”

Thomas said every state is handling CWD a little differently. But efforts to cull large numbers of deer in infected areas have worked well in New York, where a few CWD positive deer were eliminated and the disease so far hasn’t returned, and in Illinois, which has aggressively culled deer in CWD areas and held infection rates to 2 percent or less.

“If Minnesota can keep it that way, it seems to work. It’s a long, constant, expensive battle. But it beats the alternative of having CWD everywhere,’’ he said.

During the most recent hunting 2018 seasons, the Wisconsin DNR tested 16,337 deer for CWD, a fraction of more than 250,000 harvested statewide in bow and gun seasons. Some 975 were positive for CWD, about 6 percent. But in some areas, such as Iowa County in the southwestern part of the state, more than half of all deer are carrying CWD, said Tami Ryan, chief of the Wisconsin DNR’s wildlife health program.

Ryan said researchers are in the third year of a four-year study to determine if CWD in high prevalence areas is already impacting deer populations, as it has in Wyoming in both mule and whitetail deer. So far, no results available.

Ryan said the state has also no data on whether CWD is impacting license sales, whether fewer people are buying deer hunting licenses or eating venison because of CWD.

She said when it first was confirmed in Wisconsin, in 2002, there was about a 10 percent decline in license sales.

“But after that, the numbers went back up,” Ryan said. “We really don’t know if it’s impacting the decline we’re seeing more recently. We don’t have that kind of recent behavioral data.”

CWD is spreading deer-to-deer as the animals move naturally in the wild. Mature bucks can travel many miles during the fall mating season, the rut, and move CWD from one county to another, even one state to another, often following habitat corridors like rivers.

But much of the spread of CWD has been blamed on deer and elk farms which raise, trade and transport cervids for food or for trophies to be hunted in so-called “canned” hunts in fenced preserves. Outbreak maps of wild CWD cases often seem to cluster around contaminated farms, and there have been calls for additional controls, if not outright bans, on such farms.

In Minnesota’s Crow Wing County, near Brainerd, a dead deer farm buck was confirmed CWD positive in 2017. (The only reliable test for CWD is after death.)

The DNR instituted mandatory testing for wild deer shot in the area. So far, no wild deer have tested positive. But last year, the entire herd at the deer farm all perished from CWD and now the DNR wants to keep testing in the area.

The farm had only a single fence and there is still no requirement for farmers to depopulate a captive herd, even when they test positive for CWD.

“We’re really going to be watching the area around that farm going forward,’’ Carstensen said.

Engwall said his group will continue to push for rules banning the interstate and intrastate transportation of captive deer and to require double fencing around deer and elk farms to keep wild deer away from potentially CWD-infected deer farms. The group opposes canned hunts.

Minnesota has some 398 licensed deer and elk farms, Wisconsin has 380. They are regulated under state agriculture departments and generally outside the purview of state natural resource agencies.

“If you look at the maps where there have been CWD (positive) farms and where it shows up in the wild, it’s pretty clear what the problem is,’’ Engwall said.

But hunters may also be to blame, unknowingly killing an infected animal and then bringing it back home where parts of the animal are disposed of incorrectly, like tossing carcasses or deer parts into the woods.

Because most infected animals look healthy (only at the end of their lives do infected deer begin to look like zombies, and most hunters wouldn’t harvest such a sickly looking animal) most hunters don’t have any clue the animal is infected, and most deer are never tested.

Last year, Thomas, of the Quality Deer Management Association, used public license data to find that hunters from 49 different states — every state except Delaware — killed more than 32,000 whitetails in just four Wisconsin counties with the highest incidence of CWD in the state – Dane, Iowa, Richland and Sauk. (Dozens of those hunters were from Minnesota, including several from the Duluth area.) Thomas said that means it’s very possible, considering the high rate of infection in those countries, that some or even many of the non-resident hunters shot and then moved CWD contaminated deer.

Many states, including Minnesota, now have regulations against importing or moving deer carcass. But enforcement is sketchy and it’s unclear how many hunters are complying.

“Even if you don’t have CWD in your area, you can’t think of this as some far-off problem, because that’s when it’s going to show up your own backyard,’’ Thomas said. “If you hunt deer in other states, near CWD areas, if you don’t take precautions and follow the rules, you are just as likely to bring it home in a deer carcass as some deer farmer trucking a live deer across state lines.”